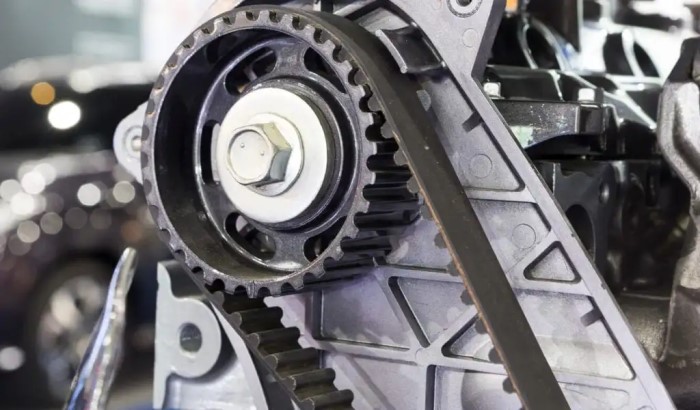 There’s nothing worse than running late only to get in your car and realize it won’t start. With all the different moving parts in your car’s engine, any number of problems can keep your vehicle from starting, but a broken timing belt is one of the most damaging and expensive problems one can have.

The timing belt isn’t a part of the engine most people think about. Of course, we all know that we need to change our oil, rotate our tires, replace windshield wipers, and maintain brake pads, but the timing belt is less well-known and has a more vague role in our car’s engine. That doesn’t make it any less important, though; a broken timing belt can destroy your engine.

What Does a Timing Belt Do?

The timing belt is a simple part with a complex job and is made from reinforced rubber with wide teeth. This belt is incredibly important for keeping your engine running the way it should despite its ordinary appearance, and it’s subject to significant wear and tear during regular use.

As the name implies, the timing belt synchronizes the different parts of your engine to ensure the shafts and valves move at the appropriate time. As the crankshaft turns, it moves the timing belt, which turns the camshaft. The camshaft then opens and closes the valves that allow the pistons to move freely, creating the combustion that powers your engine.

When Is It Time to Change Your Timing Belt

You should check your timing belt regularly as part of routine maintenance to look for cracks or chips in the rubber. However, it may begin to wear out between checks. In this case, there are some fairly consistent signs that indicate it’s time to replace the timing belt.

Because the timing belt is involved in combustion, you’ll see exhaust smoke and other signs of improper fuel burning. You can also experience misfiring, vibrations, and trouble starting as your engine loses its synchronization and the various parts move at inappropriate times.

If the bolts around the timing belt cover have become loose, you may also see oil leaking in the area. If you see any of these signs, you should have your timing belt evaluated and changed if there are signs of significant wear.

What to Do if Your Timing Belt Breaks

Unfortunately, the timing belt can also break with no warning. If you’re driving, the first clue that the timing belt has failed is that your engine will suddenly break down, which is the worst-case scenario and results in the most damage. If the timing belt breaks while your car is parked somewhere, it simply won’t start, and there’s likely to be less damage to the rest of your engine.

While some engines are designed to minimize the damage from something like a timing belt breaking, most engines can experience significant damage to the pistons, valves, and cylinder heads. This scenario can require extensive repairs alongside replacing the broken timing belt, leaving you with an expensive repair bill.

You should always be familiar with your car’s warranty terms to know what’s covered for how long. Then, if your vehicle is still covered, these repairs may be covered, significantly reducing the amount you have to pay out of pocket.